Previous studies emphasize the value of profiling physical (1-4) and morphological (5-7) attributes of elite tennis players. According to Quinn and Reid (8), regular assessments provide a better understanding of the individual needs and progression of athletes that consequently enable coaches to modify training programs. Age and gender specific normative data acquired through scientific methodology may also give rise to useful information for talent identification and development.
During the last decades, tennis has evolved in discrete aspects and became a more power-based sport (9). Significant influences on the development of racket technology and training methods are the main factors that triggered the increment in the pace of contemporary tennis (10,11). Producing high ball speed, especially during the serve, predominantly affects the success of professional players (12). According to Ulbricht et al. (4), serve speed is the paramount predictor of tennis performance in junior players.
On the other hand, existing literature regarding the aforementioned issues is restricted to either male junior or professional players, and provides limited evidence on their female counterparts. Thus, the aims of this investigation were to determine various anthropometric and functional attributes of a cohort of national female adolescent tennis players, to collate their results with those of relevant samples, and to examine the associations between serve speed and other variables. Findings of the study could contribute to the body of knowledge by adding a set of data about certain players, and be useful for coaches, athletic trainers, sport scientists, and other collaborators.

Participants
Twelve Turkish national female youth tennis players, 15.1-18.6 years of age (16.4±1.1 years), were recruited to participate in the study. Table 1 represents descriptive data regarding the sport-specific experience and weekly training volume of the participants. The ethical approval was obtained from the Human Subjects Ethics Committee of Middle East Technical University. All players and their parents were briefed on the measurement procedures and purpose of the probe before written informed consents were obtained.

Table 1. Experience and weekly training profiles of the participants
×

Procedures
Participants were tested on two separate days. On the first testing session, they were initially administered a brief questionnaire regarding their sport-specific experience, weekly training (tennis and fitness) volume, and racket specifications. As a next step, anthropometric measurements were performed by a single observer in accordance with the reference manual (13). On the second testing session day, players were requested to answer questions concerning their health status in order to ensure that they had no acute or chronic disease and/or musculoskeletal injury. All fitness tests were completed in an indoor tennis court. They were requested to carry out a warm-up procedure including physical (jogging and stretching) and technical (ground strokes rallies and serve) workouts. Serve speed, vertical jump, linear speed, agility, and grip strength evaluations were conducted accordingly.
Measures
Anthropometric Measures
Sixteen anthropometric variables (stature, body mass, eight skinfolds, four girths, and two breadths) were measured. Body height was measured with a portable stadiometer (Seca 213, Hamburg, Germany) to the nearest 0.1 cm. Body mass (0.1 kg) was evaluated with bioelectrical impedance analyser (Tanita, BC-418, Japan). Skinfolds (triceps, biceps, subscapular, supraspinal, suprailiac, abdominal, thigh and medial calf) were assessed using a caliper (Holtain Ltd, Crymych, UK) to the nearest 0.2 mm. Girths (upper arm flexed and tensed, upper arm relaxed, thigh and maximum calf) were measured with a flexible steel tape to the nearest 0.1 cm. Biepicondylar humerus and femur breadths were measured with a small sliding caliper to the nearest 0.1 cm. BMI was calculated by dividing weight (kg) by the squared height (m2). Body density was determined (14) and used to estimate the body fat ratio (15). Muscle mass percentage was calculated via the equation of Poortmans et al. (16). Eight skinfold measurements were taken to determine the sum of three (triceps, subscapular, supraspinal), six (triceps, subscapular, supraspinal, suprailiac, abdominal, and thigh), and eight (triceps, subscapular, supraspinal, suprailiac, abdominal, thigh, biceps, and medial calf) skinfolds (7). Somatotype components were calculated using the method of Carter and Heath (17).
Serve Speed
A radar gun (PR1000-BC; Ball Coach, Santa Rosa, Calif., USA) was used to measure serve speed. It was positioned 2 m behind the server and aligned with the ball trajectory. Each subject was encouraged to hit with the highest speed from the deuce-court in 30 s intervals. Five successful serves were noted and the means were used for the analysis.
Vertical Jump
Countermovement jump test was conducted on a contact mat (SmartJump, Fusion Sport, Australia). The device was connected to a digital timer, recording flight time to give vertical jump height. Players were asked to start the test in standing position. Their hands were on their hips throughout the test. Following the immediate downward movement, they performed take-off to jump the maximal height. The best of three trials was used for further analysis.
Linear Speed
Ten- and 20-m linear sprinting performances were measured using electronic timing gates (Smartspeed, Fusion Sport, Australia) positioned at 0 m, 10 m, and 20 m. The players started the test individually when they were ready. The assessment was repeated twice, and the fastest one was recorded.
Agility
T agility test was administered according to the procedure described in previous studies (18,19). Players were instructed to run forward and shuffle sideways to the left. They then shuffled from left to right and right to left and ran backwards to the start/finish line where electronic timing gates (Smartspeed, Fusion Sport, Australia) were placed. The test was performed twice and the best score was used for analysis.
Grip Strength
A digital hand dynamometer (T.K.K. 5401 Grip-D, Takei, Japan) was utilized to evaluate maximal isometric grip strength. Players were in standing position and keeping their arm straight along the body. They were asked to hold the dynamometer with their dominant hand, and grip the handle as hard as they could for three seconds. The highest score obtained from the three trials was used for data analysis.
Analysis
All data were analyzed using SPSS for Windows v20. Central tendency (mean and standard deviation) and range (minimum and maximum) were calculated for the variables. Normality was checked by Shapiro-Wilks's test (p>0.05). Pearson’s correlation coefficient was used to ascertain the relations between serve speed and other variables. Statistical significance level was set at p<0.05.

Table 2 represents the descriptive statistics for the anthropometric, physical fitness, and racket specification characteristics of the players. Correlations between serve speed and the other variables are presented in Table 3. Serve speed was found to be significantly associated with body weight and BMI. No significant correlations were found with other parameters. 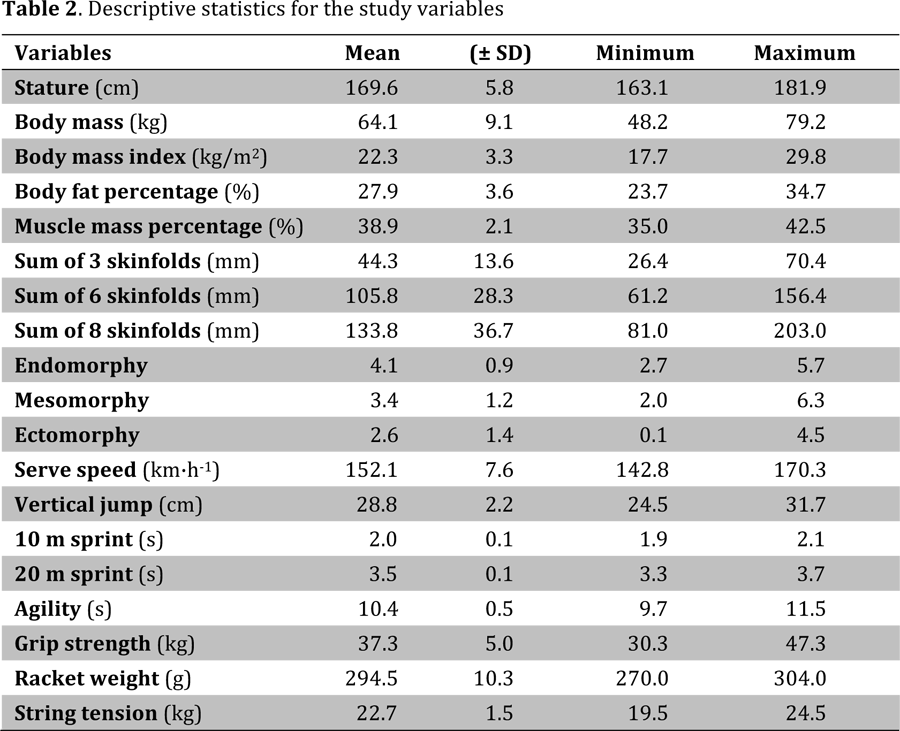 Table 3. Correlations between serve speed and the other variables
× 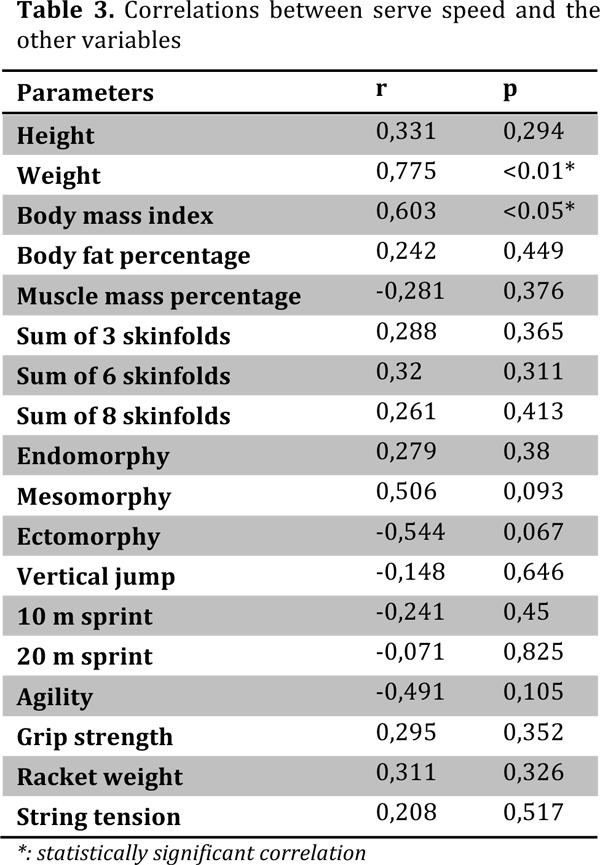 To the best of our knowledge, this is the first study that provides cross-sectional data concerning anthropometric and physical fitness characteristics of national Turkish female adolescent tennis players. Their results indicated similarities and differences in several measurements with those of the normative reference samples reported by previous studies, such as Sánchez-Muñoz et al. (7) who has evaluated the morphological characteristics of top female junior (age: 16.1±0.5 years) tennis players in the world.
The comparison revealed that Turkish players were slightly heavier than their top ranked counterparts. However, similar results were obtained for body height and sum of three skinfolds. They had higher figures for BMI, sum of six skinfolds, and sum of eight skinfolds, and lower values for body fat ratio. They also had considerably less muscle mass ratio. Furthermore, the results demonstrated a disparity between the somatotype profiles. The mean somatotype of top level players was noted by Sánchez-Muñoz et al. as endomorphic mesomorph, whereas participants of the present study were found as mesomorphic endomorph.
Ulbricht and his collaborators (4) investigated the physical and anthropometric characteristics of national German female junior (age: 14.9±0.5 years) players. Their findings demonstrated that German athletes, when compared to Turkish players, had relatively minor measures of height, weight, BMI, and grip strength, but superior results on vertical jump, 10, and 20 m sprint times. Similar serve speed scores were observed. In another recent study, Kramer et al. (2) examined the body size and fitness attributes of high-ranked female junior (age: 14.4±0.3 years) Dutch players. Although body heights of the two groups tend to be similar, Dutch players had considerably lower body weight. Besides, they had better scores on 10 m sprint and vertical jump tests.
Vaverka and Cernosek (20) analysed the serve speed and body height of female professional players who participated in Grand Slam tournaments in 2008 and 2012. Their report indicated higher scores on both variables.
Although the vast majority of previous studies noted positive associations between stature and serve speed (21-26), the present results revealed significant correlations between serve speed and body weight, and serve speed and BMI. Similarly, Wong et al. (27) found a significant association between BMI and serve speed in elite male players. They explained this finding by focusing on the possible positive effects of greater muscle mass on production of power and torque. According to Gale-Watts and Nevill (6), rather than level of adiposity, greater BMI is a presumptive indicator of higher muscle mass in athletic populations.
No significant associations were found between physical fitness and racket specification variables and serve speed. This result is in accordance with the findings of Bonato et al. (21), who studied the relationships between anthropometric, functional and racket characteristics, and serve speed in male professional players. Except for body height, their results showed no significant relations between serve speed and other parameters. The result obtained by the current study could be due to the complexity of tennis serve that requires precise coordination of the lower and upper body (28), and major muscles (29). According to Elliott (30), a kinetic chain involving sequential activation and coordination of different body parts is the prerequisite of the high speed tennis serve. Supportively, Pugh et al. (31) stated that rather than a single factor, it may depend on the combination of various determinants like strength, flexibility, coordination, and technique.

This study is original in the sense that it specifically focuses on the physical and anthropometric characteristics of a group of national female youth tennis players and their associations with serve speed. Regarding the morphological results, main discrepancies between Turkish and reference players were observed in muscle mass ratio, and the dominant component of somatotype. Similar or slightly different figures were obtained for serve speed and physical fitness measurements. Depending on these results, it is suggested for the coaching teams of top Turkish adolescent players to strive for increasing the muscle mass ratio that may lead to changes in body composition, and consequently boost their performances. On the other part, results highlighted the importance of several anthropometric features in producing high speed tennis serve among elite female junior players. It must be taken into account that this study was limited by sample size and purposive sampling. Future studies are recommended to establish normative data for elite tennis players across different age groups and in both genders.

The researchers would like to thank all players and national coaches for their support and cooperation.