Objective: The increase in physical activity (PA) and exercise prescription is crucial in the prevention of chronic diseases. However, it is well known that the lack of physicians' knowledge is an obstacle toward promoting PA. In this present study, medical students’ (MS) knowledge and perception regarding PA and exercise prescription were evaluated.
Materials and Methods: After a two-week elective internship program in sports medicine, a total of 65.7% of the 216 fifth-year MS (n=142; mean age, 24.2 years), were included in this study. Students completed several questionnaire forms regarding their knowledge of PA counseling and sports medicine, International Physical Activity Questionnaire (IPAQ) form and Short Form Health Survey (SF-36).
Results: During five years of medical education, more than two-thirds of the students (69.1%) had neither any discussion regarding PA counselling, nor exercise prescription. MS stated that after two weeks of the educational program, they felt sufficient knowledge to advise on PA and the rate increased to 76.8% from one-fourth at the beginning (p<0.001). Nearly all of the students (93.7%) affirmed that they believed in the benefits of PA counselling at the end of the educational program. MS who were more prone to PA counselling had significantly higher IPAQ and SF-36 scores (p=0.006 and p=0.007, respectively).
Conclusion: Our results indicated that lack of knowledge is a barrier in exercise counselling for MS as future physicians. Along with the aforementioned, an important aspect of counseling PA to patients is a higher level of PA behavior among MS.

Around the world, the burden of chronic diseases is growing rapidly every year, causing millions of deaths and estimating trillions of dollars in the annual cost of medical services (1). Physical activity (PA) has been associated with a decrease in all-cause mortality, even after adjusting for other relevant risk factors (2). In the prevention of chronic diseases such as diabetes, obesity, stroke, hypertension, cardiovascular diseases, dyslipidemia, osteoporosis, depression, dementia, and even cancer; PA and exercise are now considered as an important intervention (3-6).
Physicians can play an effective role to fight against the pandemic of physical inactivity and they are being guided to promote PA amongst patients. Evidences suggest that intensive and frequent exercise counselling by primary health care can increase patients’ PA habits (7,8). The increase in PA and exercise prescription appear to be a significant solution in the prevention and treatment of the aforementioned diseases. On the other hand, lack of physicians’ knowledge is a well-defined barrier that keeps from prescribing exercise to their patients (9). The present paper was aimed to assess the knowledge level and perspective of medical students (MS) regarding PA and exercise prescription. It was hypothesized that after the two weeks of sports medicine education program, MS would improve their knowledge and experience about PA counselling and its effects on the treatment of chronic diseases. Furthermore, we asked if there is any relation between the PA levels of MS and their propensity for exercise counselling.

Study Design
A prospective cohort study was conducted on MS during a sports medicine internship program in the fifth-year of their six-year medical faculty education. Hacettepe University Ethics Committee (Decision number: GO 17/528) approved the study.
Participants
Of a total of 216 MS who underwent a two-week sports medicine elective internship program, 142 (response rate: 65.7%) were included in the study, all giving their informed consent with the returned questionnaire forms. Data were obtained by questionnaires between September 2014 and May 2016. The educational program for two weeks contained theoretical and practical classes related to sports injuries, exercise physiology, and exercise prescription for chronic diseases. The students were informed about the study at the first day of the internship program. They were asked to fill out questionnaires prior to and a month after the elective internship program. The questionnaire form targeted MS’ knowledge about exercise prescription and confidence in counselling patients about PA.
Questions covered age, weight, height, smoking habit, knowledge about sports medicine issues and the effects of exercise on chronic diseases. The questionnaire assessed perception about the importance of PA in the prevention and management of chronic diseases, and their previous education about exercise counselling. At the beginning of the education program, they were also asked to fill the International Physical Activity Questionnaire-Short Form (IPAQ-SF) and the 36-item Short Form Health Survey (SF-36) in order to evaluate their PA status. We aimed to obtain internationally comparable data on health-related PA as lower (<600 MET-min/wk), sufficient (600-1500 MET-min/wk) and higher PA (>1500 MET-min/wk). SF-36 consists of eight scaled scores (with 36 items), which are the weighted sums of the questions in their section; namely vitality, physical functioning, bodily pain, general health perception, mental health, physical, emotional and social role functioning.
Data analysis
Statistical analyses were completed using the SPSS software version 21 (SPSS, Chicago, IL, USA). The variables were examined using visual (histograms, probability plots) and analytical methods (Kolmogorov-Simirnov/ShapiroWilk’s test) to determine whether or not they were normally distrubuted. Descriptive analyses were showed using means and standart deviations for normally distrubuted variables, and using medians and interquartile range (IQR) for non-normally distrubuted and ordinal variables. The Chi-square test or Fisher’s exact test, where appropriate, and McNemar’s test were used to compare proportions in different groups. Mann-Whitney U test was used to compare non-normally distributed variables. The p<0.05 level was considered to reveal a statistically significant result.

Table 1. Anthropometric data of the participants
×

Eighty seven percent of MS stated that they didn’t know about the sports medicine branch as a residency program before they started their education at the medical faculty. Gender or being physically active were not related with their awareness of sports medicine discipline (p=0.800 and p=0.425 respectively). MS were also asked for their prior opinion about five main fields of occupation for sports medicine physicians with an open-ended question. After the two-week sports medicine education program, the viewpoint of MS about the primary duties of sports medicine physicians improved for exercise prescription (53.5% to 65.5%), consulting exercise for different groups (children, elderly, pregnants, etc.) (50.0% to 61.9%) and preparticipation examination (37.3% to 50.7%).
More than two-thirds of the students (69.1%, n=96) reported not to have any discussion about PA counselling or exercise prescription before attending the elective sports medicine internship program. Despite the lack of previous education, more than half of the respondents (58.4%, n=83) declared in the open-ended question that PA could be useful for the treatment of diabetes mellitus before starting the internship program. The rate of students concluding that exercise prescription would be highly important for the treatment of diabetes mellitus in their future practice increased during the two-week program, from 58.4% to 92.9%. (p<0.001) (Figure 1). Almost three-fourth of the students (75.3%, n=107) were feeling not capable enough to counsel patients about PA at the beginning of the program, while 88% of them (n=125) announced positive attitudes for exercise counselling after their graduation. MS stated that after two weeks of the educational program, they felt sufficient knowledge to advise on PA, increasing from one-fourth at the beginning to 76.8% (p<0.001) in this respect (Figure 2). By the end of the elective sports medicine internship program, nearly all of the students (93.7%, n=133) decleared that they believed in the benefits of PA counselling and goals, to apply in their future practice. 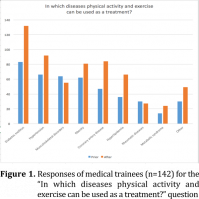 Figure 1. Responses of medical trainees (n=142) for the “In which diseases physical activity and exercise can be used as a treatment?” question
×

Figure 1: Responses of medical trainees (n=142) for the “In which diseases physical activity and exercise can be used as a treatment?” question 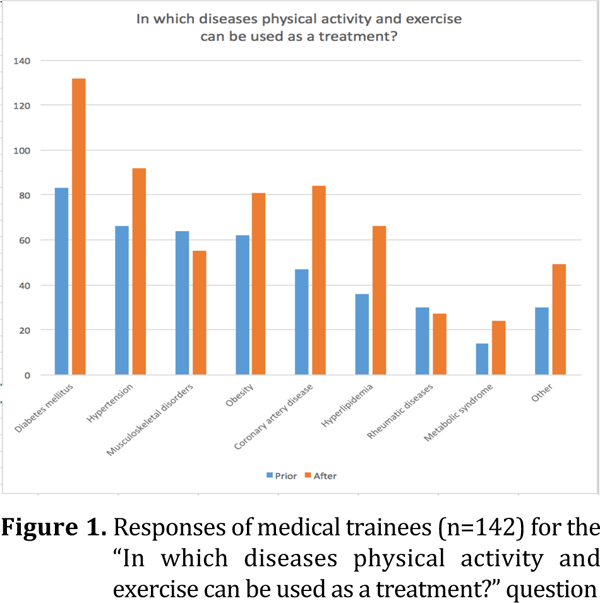 Figure 2. The rate of the students’ self confidence for physical activity counselling
×

Figure 2: The rate of the students’ self confidence for physical activity counselling

The results of the IPAQ short form revealed that participants’ median total MET/min score was 1712.3 (IQR: 2384.3) (for females 1399.5, IQR: 2242.1), for males 1900.5, IQR: 2254.5) per week. Gender or BMI were not related with IPAQ scores among medical trainees (p=0.118 and p=0.883 respectively). According to the results of IPAQ; 53.1% of the students reported spending more than 1500 MET mins/wk in total, while only 17.7% of them reported below 500 MET mins/wk. More than half of the weekly activity reported by the students corresponded to walking, with 1268.3 MET mins/wk. Vigorous PA caused an energy expenditure of 782.7 MET mins/wk, whereas moderate activity was reported as low as 370.2 MET mins/wk.
The Short Form Health Survey (SF-36) was evaluated via two key scores, mental component summary and physical component summary. Our participants scored (on a scale of 0 to 100) 44.0 from the mental component, and 55.0 from the physical one. Regarding the questionnaire, MS who had both higher IPAQ and SF-36 scores, were significantly more prone for PA counselling (p=0.006 and p=0.007, respectively) (Figure 3). 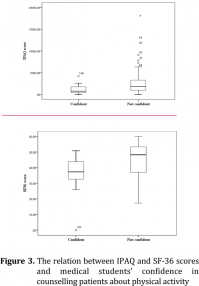 Figure 3. The relation between IPAQ and SF-36 scores and medical students’ confidence in counselling patients about physical activity
×

Figure 3: The relation between IPAQ and SF-36 scores and medical students’ confidence in counselling patients about physical activity

Our findings suggest that MS were not trained to give PA advice to patients about the benefits of exercise or exercise prescription. Therefore, undergraduate medical school education should focus on health promotion in their students, in order to improve public health behaviours in the future. We are in need to change medical school curricula to increase knowledge amongst future physicians of the benefits of PA in health promotion and disease prevention. Moreover, it is essential to implement effective continuing medical education programs in order to increase healthcare providers' knowledge and skills in sports medicine. Additionally, the results of our study point to a greater level of PA behaviour in MS, which is important for physicians to perform PA counselling in the future. Thus, personal exercise behaviour is suggested for physicians as a lifelong habit.

The authors declare no conflicts of interest and do not have any financial disclosures. No competing interests were declared.