Does Increased Body Mass Index Cause Pain and Impact Overall Quality of Life in Case of Venous Insufficiency?

Objective: Chronic venous insufficiency is the most common vascular disease of the lower extremity. It is predicted that obesity, which is one of the risk factors of venous insufficiency, would influence the clinical appearance of the disease. The purpose of this study is to investigate the changes in pain scores and overall quality of life of patients with venous insufficiency, according to body mass index.
Materials and Methods: Patients (n:63) who applied to the sports medicine clinic with lower extremity pain, and were found to have venous insufficiency in examinations were included in the study. After noting their demographic data, patients’ height and body weight measurements were performed and body mass indices calculated. The patients were divided into four groups based on their body mass index (BMI). The visual analog scale and the EQ5D quality of life scale were then applied to the patients.
Results: According to their BMI, there were 16 patients in Group 1 (22.6 kg/m2), 23 patients in Group 2 (27.5 kg/m2), 17 patients in Group 3 (32.6 kg/m2), and seven patients in Group 4 (37.5 kg/m2). There were no statistically significant differences between the groups in terms of demographic data or degree of venous insufficiency. The visual analog scale score and the EQ5D score were 4.1 ± 2.9 and 0.7 ± 0.2 in Group 1; 4.7 ± 2.9 and 0.6 ± 0.3 in Group 2; 6.3 ± 2.1 and 0.5 ± 0.1 in Group 3; and 7.9 ± 2 and 0.3 ± 0.2 in Group 4, respectively. Statistical analysis revealed a statistically significant difference between the groups in terms of their EQ5D score (p:0.01). Although visual analog scale score increased in parallel with body mass index, there was no statistically significant difference (p:0.055). Body mass index was found to be negatively and moderately correlated with pain (p:0.004, r: -0.40) and overall quality of life (p:0.003, r: -0.40).
Conclusions: This study revealed that the increase in body mass index affects pain and quality of life independently of the severity of insufficiency.

The prevalence of obesity is high in all nations across the world and has been increasing in recent years (8). This has led to an increase in the prevalence of other diseases such as cancer, diabetes, insulin resistance, arthritis, hypertension, hyperlipidemia, heart diseases, and vascular diseases as well, since it is a risk factor for these diseases (7,9-11). Obesity does not only increase the risk of these diseases, but also weakens physical functions of patients, increases their sense of pain, and reduces quality of life (8). In one study conducted in the general population, it was reported that life quality of underweight individuals or obese individuals decreased, and increased body mass index led to negative effects on health (12). Multiethnic general population studies revealed that diabetes, hypertension, cardiovascular diseases, and musculoskeletal system diseases caused decrease in quality of life on their own (13). In another study, it was pointed out that many different psychosocial factors affected quality of life, but obesity was the most significant independent factor for low quality of life (14).

Chronic diseases accompanied by obesity are expected to worsen the quality of life. For example, patients with moderate or severe osteoarthritis and obesity were reported to have more limited activity and higher pain (15). Gardner et al. reported that individuals with metabolic syndrome and obesity had worse physical function, health-related quality of life, intermittent claudication, and peripheral circulation (16). Oeser et al. found that obesity was an independent risk factor for lower functional capacity and higher inflammatory marker levels in patients with lupus erythematosus (8).

The visual analog scale (VAS) was used to determine the level of pain (18), and the EQ5D scale was used to assess the life quality (12). The visual analog scale involves the patient’s subjective interpretation of pain between 0 and 10 on a visual scale (18). The EQ5D scale which was tested for Turkish validity and reliability by Kahyaoğlu assesses quality of life under the following dimensions: mobility, self-care, usual activities, pain/discomfort & anxiety/depression. The subject chooses one of the three options (‘no problem’, ‘some problem’, and ‘major problem’) for each item. A total of 243 different possible health results are identified using the scale and an index score varying between 0 and 1.00 is produced as a result (20). The Local Ethics Committee approved the study.

Statistical Analysis
SPSS v22.0 software was used for data analysis. Descriptive statistics was utilised to identify the data and the Kruskal Wallis test was applied to determine differences among independent groups. In parameters where a difference was detected, Bonferroni corrected Mann Whitney-U test was applied to determine which groups caused the difference. Pearson correlation analysis was done to determine the relationship between the scales and body mass index. Statistical significance level was accepted as p<0.05. Results were presented as mean ± standard deviation. 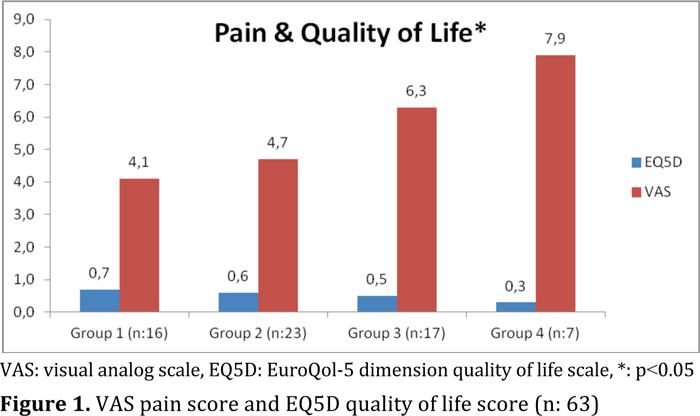 Venous diseases are frequently seen in the society, particularly in women, and impose high socio-economic burden, thereby causing loss of labour and decreased quality of life (21,22). Major risk factors concerning the disease include genetic predisposition, standing for prolonged periods of time, thrombophlebitis and lower extremity history, number of pregnancies and obesity (23). Most studies in the literature focus on the relationship between pain level and disease stage in patients with chronic venous insufficiency (18). In addition to pain, there are also studies focusing on the correlation of degree of clinical findings and progress of the disease with health-related quality of life (18,24).

Recent studies investigated clinical effects of stage and severity of chronic venous insufficiency and reported that progression of the disease increased symptoms in patients. When progress of the disease was stopped or slowed down by medical or exercise treatment, it was observed that subjective assessments of patients were positively affected; pain decreased, independence increased, and quality of life improved (22,25,26). On the other hand, health authorities are alarmed by obesity as an epidemic affecting all nations across the world. Strategic plans are developed in an attempt to minimize the burden caused by obesity on individuals and communities. Given this, it is a matter of interest how obesity affects complaints of patients with accompanying chronic diseases, and how these patients should be treated. In studies on different diseases such as vascular disease, diabetes and metabolic syndrome, it was found that characteristic findings and course of disease might change, and that symptoms might increase when accompanied by high body mass index/obesity (11,14,23,27).

In a study where patients who randomly received four different treatment options were followed-up for six months, it was reported that there was no difference between treatment groups and that the negative effect of the disease on the quality of life increasingly continued despite treatment (28). In another study from Turkey, factors such as advanced age, high body mass index, prolonged working times, and regular drug use were found to be correlated with decreased quality of life (29).

Although this is the first study in the literature that investigates clinical symptoms according to body mass index classification, it has certain limitations. The first limitation is the inability to analyse other parameters which might have affected the clinical appearance of the disease. The second limitation is the low number of patients in the study. This study does not include any patients in the underweight (˂18.5 kg/m2) and extreme obesity (˃40 kg/m2) categories according to World Health Organization’s body mass index classification. The third limitation is a result of the fact that the study was carried out in a hospital, and only those patients possibly with more pain have applied to a physician, which might have influenced the results.

Many thanks to Prof. Dr. Turhan YAVUZ for his assistance in photoplethysmography measurements.