Objective: We aimed to evaluate the effects of a supervised aerobic exercise therapy on quality of life in patients with type 2 diabetes mellitus (DM).
Material and Methods: Thirty-one patients with type 2 DM (8 male/23 female; aged between 42 and 65 years) who had hemoglobin A1c (HbA1c) levels between 7.5% and 9.5% were included in the study. Anthropometric measurements (height, body weight, body fat percentage, body fat mass and body mass index, waist circumference, hip circumference) and cardiopulmonary exercise tests were performed before and after the study. The patients undertook a 12-week aerobic training program that included aerobic-type walking and/or cycling 3 days a week. All patients were asked to complete the Turkish version of the 36-Item Short Form (SF-36) Health Survey before and after the training program. SF-36 is a commonly used questionnaire that was designed to measure life quality of patients who have physical illnesses
Results: We detected significant improvements in all subscales of the SF-36 questionnaire. The emotional role limitation score showed a less significant reduction (p=0.049) compared with the other subscales. The anthropometric values were also improved significantly after the 12-week aerobic training program (p<0.05).
Conclusion: We observed that a supervised regular aerobic exercise program used in this study had a positive effect on the quality of life in individuals with type 2 DM in our study. Therefore, it might be a beneficial strategy to encourage patients with type 2 DM to do regular exercise during the management of their disease in order to overcome the mental, social, and physical difficulties.

The importance of the concept of health quality has become of greater interesting all over the world after health was defined as a state of complete physical, mental and social well-being by the World Health Organization. Besides treating major symptoms of chronic disease and increasing life expectancy, in recent years, physicians have also worked and focused on improving mental and social health during the management of chronic diseases. In this regard, the concept of life quality for patients with diabetes has come to be much more significant in terms of determining the therapeutic effect (2).
It was shown by various researchers that quality of life scores of patients with type 2 diabetes mellitus (DM) were lower than people without diabetes (3). On the other hand, it was also pointed out that patients with diabetes had higher Quality Of Life (QOL) scores compared to patients who had to other chronic diseases.
It was also suggested that various exercise therapies such as aquatic-based, resistance or aerobic exercise, generally improved quality of life in patients with type 2 DM disease (4,5,6).
In our study we aimed to evaluate the effects of supervised aerobic exercise therapy in the quality of life of patients with type 2 DM.

Patients
Patients with type 2 diabetes mellitus (n=2418) who presented to the endocrinology department of a university hospital over a 3-month period were recruited in the study.
The study had the following inclusion criteria: age between 42 and 65 years and hemoglobin A1c (HbA1c) levels between 7.5% and 9.5%. The exclusion criteria were as follows: coronary artery disease, arrhythmia, autonomic neuropathy, proliferative retinopathy (grade 3-4), arthiritis, neurologic and orthopedic limitations, uncontrolled hypertension, morbid obesity, and insulin pump use. Sixty-seven patients who met these criteria were screened in the laboratory of the Department of Sports Medicine. Thirty patients did not accept participation in the study. Thirty-seven patients were included in the exercise program. Two female patients could not complete the study due to an ankle sprain and angina. Four male (M) patients left the study due to personal limitations. Thirty-one patients (8M/23F) tolerated and completed the whole study protocol (Figure 1). The study was approved by the University’s Ethics Review Board for Human studies and the participants gave informed consent prior to commencement of the study. 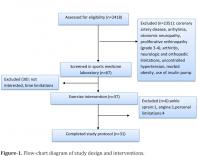 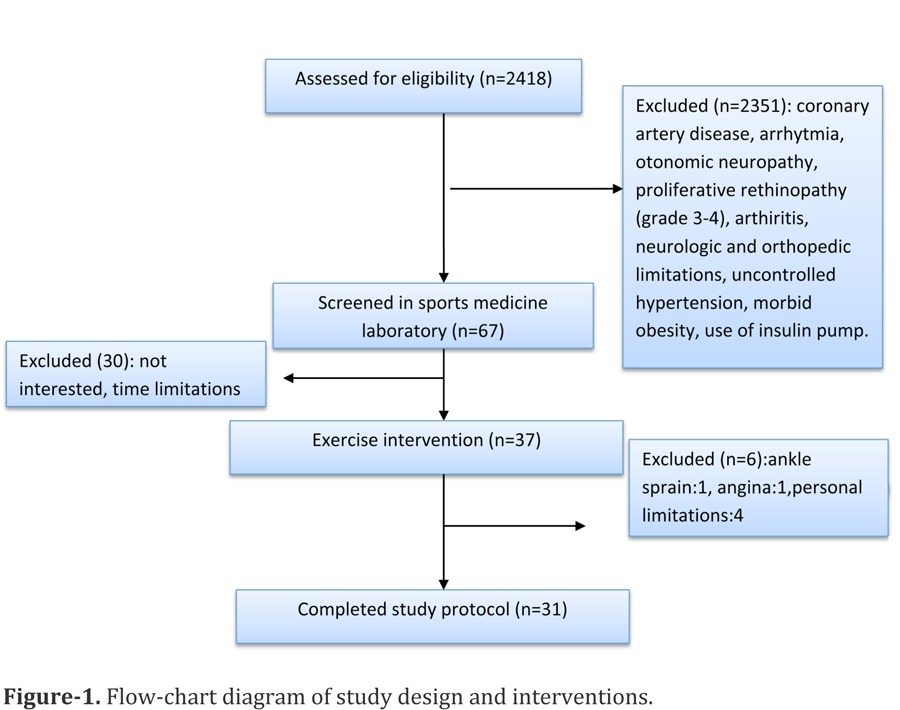 Experimental Protocol
The exercise training protocol was conducted in the sports medicine laboratory of a university hospital. Each patient first underwent a comprehensive physical examination, which included a 12-lead electrocardiogram (ECG) recording, anthropometric measurements and a blood pressure measurement at rest. Thereafter, the Turkish version of the SF-36 questionnaire was given to all patients and they were subjected to a cardiopulmonary exercise test (CPET) using the Bruce protocol (7,8). On the next day, all patients began a 12-week aerobic training program. After completing the supervised exercise program, all of the tests performed at the beginning of the program were repeated at the end. We could not measure metabolic parameters (anaerobic threshold, maximum oxygen uptake (VO2 max)) after the exercise program because some technical problems occurred in our cardiopulmonary exercise testing (CPET) system. Blood glucose and blood pressure were measured and recorded before and after each exercise session in order to avoid medical problems such as hypoglycemia. Medications of patients were regulated for training days by physicians of the endocrinology department.

Assessment of Quality of Life (QOL)
Health-related QOL of patients were measured using the 36-Item Short Form (SF-36) Health Survey. Validity and reliability analyses of the Turkish version of SF-36 were performed by Kocyigit et al (9). It is a well-known and commonly used questionnaire that was designed to measure life quality of patients who have physical illnesses. It has also been used in patients with psychiatric issues as well as healthy people. Using this method, both positive and negative aspects of an individual’s state of health can be measured. SF-36 is convenient to apply to patients owing to its short, self-administrative, and pellucid nature. The SF-36 is a survey form that evaluates 8 dimensions of health status with 36 items. Four (physical functioning, role-physical, bodily pain, general health) of these 8 subscales are categorized as physical, and 4 (mental health, role-emotional, social functioning, vitality) of them are mental components (1). There is no total score to the scale. Only total scores in 8 sub-dimensions are calculated. Scores in subscales range between 0 and 100, and higher scores indicate a better state of health (10).

Supervised Exercise Program
The exercise program began under the supervision of specialists with 60 minutes of walking and cycling. The duration was then increased by 6 minutes in each exercise session of the first two weeks culminating with 90 minutes of exercise duration. Exercise intensity adjustment was based on heart rate level at anaerobic threshold as determined using CPET for each patient. Stretching exercises were performed for warm up and cool down before and after each exercise session because this study is part of longitudinal study that also comprised resistance and combined exercise programs. For the time being we only have results of the aerobic training group. We are planning to publish other results in the future.

The anthropometric values of patients before and after the exercise program are presented in Table 1. There were significant improvements in all of the anthropometric values (p<0.001).
When we compared the SF-36 scores before and after exercise program, we detected significant improvements in all subscales (p<0.05). There was a less significant reduction in the emotional role limitation score in our study (Figure 2).

Table 1. Changes in the anthropometric measurements of the patients (Mean SEM)
×

Figure 2. Comparison of SF-36 scores of the patients before and after the traning program
×

Figure 2: Comparison of SF-36 scores of the patients before and after the traning program 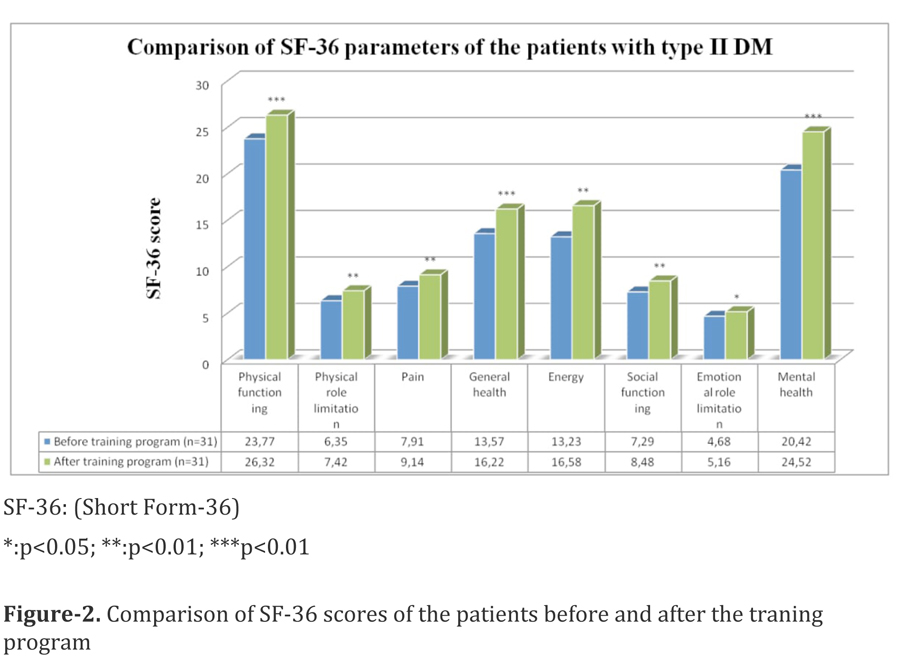 The authors declared no conflicts of interest with respect to the authorship and/or publication of this article.

The authors received no financial support for the research and/or authorship of this article.