The Status of Micronutrient Elements in Adolescent Athletes: A Gastronomy City Example

Objective: Adolescent athletes are individuals who require special attention. Health problems related to nutritional deficiencies and associated loss of performance must be prevented in this group who are still continuing to grow and develop. The aim of this study was to make a retrospective examination of the micronutrient element status of adolescent athletes.
Materials and Methods: The hospital records of adolescent athletes aged between 12 and 17 who were admitted for pre-participation examinations were collected. The time frame was designated as twelve months. The athletes were separated into 2 groups; according to the time of admission. Group 1: 1st April -31st August, Group 2: 1st September -31st March. The test results of micronutrient elements were selected from the blood analysis of the athletes.
Results: The test results of 166 athletes were retrieved from the digital archives of the hospital. 111 (67%) of them were belonging to male athletes and 55 (33%) were to females. There were no significant differences between the groups in terms of demographic data and duration of training (p>0.05). Hemogram results revealed no significant difference between two groups. Iron deficiency anemia was determined in 10 (18%) female athletes and in 1 (1%) male athlete. Serum ferritin levels were low in 20 (15%) athletes; 15 (33%) were belonging to females and 5 (6%) to males. Anemia due to vitamin B12 or folic acid deficiency was not detected, but 10 (7%) athletes had severe vitamin B12 deficiency and 6 (4%) had severe folic acid deficiency. A statistically significant difference was determined between the groups in respect of serum 25 (OH) vitamin D concentration (p<0.05). In both of the groups, the female athletes and those who trained indoors had lower serum 25 (OH) vitamin D levels. Age showed a negative correlation with Vitamin B12 levels and folate levels, whereas a positive correlation detected with ferritin levels (p<0.05) in male athletes.
Conclusions: Factors such as age and gender, the training area and seasonal factors can affect the micronutrient element status during adolescence. All athletes should be evaluated in terms of personal risk factors and adolescent athletes should be closely monitored to prevent micronutrient deficiencies.

Adolescence is a time of intense physiological, psychological and social change. Globally, 85% of the adolescents who will be the adults of tomorrow live in developed countries. Individuals in this age group are accepted as healthier compared to those at other stages of the life cycle, irrespective of living in developed or undeveloped countries (1). In developed countries, health services are struggling with chronic diseases in the increasing elderly population and in developing countries, pre-school children and women of reproductive age are evaluated as requiring nutritional support. Thus adolescents, squeezed between the paediatric and adult groups, are not shown the necessary care for some problems such as malnutrition and micronutrient deficits related to adolescent nutrition (1).

However, there is an increased need for nutrition and energy in the adolescent period to be able to achieve healthy growth and development. In particular, adolescent athletes must pay attention to the intake of additional energy required by physical activity. Because, adequate food and fluid help to maintain blood glucose concentration during exercise, maximize exercise performance, and improve recovery time. In nutritional guidelines, the main focus for athletes is on the need for energy, micronutrients and fluid. In most of these guidelines, less importance is given to micronutrient elements (2). Various studies have reported that the intake of fluid, fibre, iron, calcium, potassium, magnesium, folate, and vitamins A, D, E and B12 is insufficient in adolescent athletes in different branches (2-5). Each of these micronutrient elements has indispensable benefits for the provision of muscle contractions, nerve transmission, oxygen transport, enzyme activation, immune functions, antioxidant activity, bone health and acid-based balance in the blood for adolescent athletes (6).

Anemia is a health problem that develops as a result of nutrition-related deficiencies and is often seen in adolescents. When the causes of anemia are examined, the development of iron deficiency-related microcytic anemia has been often reported. In iron deficiency, insufficiencies in nutritional intake result in chronic urinary/gastrointestinal blood loss or intravascular hemolysis associated with intense exercise. Anemia not only affects physical performance but also cognitive functions. Findings start in the early stage of iron deficiency and complaints emerge without development of anemia (1). Serum iron is critical for hemoglobin production demonstrating its importance for performance and oxygen transportation needed during exercise (6). Although 3% of athletes are known to be affected by iron-deficiency anemia, there are insufficient data about the prevalence of folate and vitamin B12 deficiency, which are important in hemopoiesis (3, 7, 8).

Folate and vitamin B12 are co-factors funtioning in the methionine pathway. Substrates, such as catecholamines, creatinine and DNA, which have a central role in physical exercise, are obtained from this pathway (9). However, the daily intake of folate and vitamin B12 of adolescent athletes remains well below the amounts recommended by the World Health Organisation (3).

Adolescence is the stage when bone remodelling is highest. Calcium, phosphorus and vitamin D have a key role in skeletal development and protection. By increasing calcium absorption in the intestines, vitamin D provides the continuation of normal calcium metabolism (7, 10). It must not be forgotten that in addition to calcium and phosphorus, magnesium is indispensible for healthy bone structure (11). It is known that regular exercise has the effect of increasing bone mineral density in adolescents (7). However, athletes have the same risk as the non-sporting population of vitamin D deficiency and seasonal changes in vitamin D (12). In particularly, athletes who practice and compete indoors while avoiding sun exposure are at risk for vitamin D deficiency any time of the year. Low vitamin D concentrations observed in athletes result in the majority of cases in a predisposition to bone pathologies such as stress fractures. To prevent these pathologies developing, optimal vitamin D, calcium and phosphorus levels must be protected in athletes (13).

Magnesium is an important mineral for cellular reactions with a physiological regulatory function in the human body. This mineral has a role in fat oxidation and protein synthesis and glycogen destruction especially during exercise. Magnesium depletion manifests as muscle fatigue, an increased need for energy and an effect on cardiopulmonary functions in submaximal exercise (6). Sudden changes in the magnesium level are not expected provided there is no change in the hydroelectric balance (14, 15). On the other hand, the serum magnesium level can be currently evaluated as a marker of the training level of athletes (16).

Each micronutrient element has a critical function in the body. There is lack of knowledge in Turkey about nutrition of young athletes. Attention to nutrition must be increased in both physicians and the athletes. Performance losses and health problems related to nutritional deficiencies must be prevented in adolescent athletes whose growth phase have not been completed. The aim of this study was to determine micronutrient status in adolescent athletes according to gender, sports branches (indoors and outdoors) and seasonal change.

A retrospective investigation has been carried on the files of athletes who had admitted to Sports Medicine. The study included athletes aged between 12-17 years who were attending a regular training schedule (at least 1 hr per day, 3 times per week) for the last year and were not taking any nutritional supplements or medical treatment. All the athletes were living in a provincial centre, geographically located 38º 28' and 38º 01' East; 36º 38' and 37º 32’ North at an altitude of 850 m above sea-level.

The biochemical tests of the athletes, including hemogram, ferritin, serum iron, total iron binding capacity, total iron saturation, folate, vitamin B12, 25 (OH) D vitamin, serum calcium, serum phosphorus and serum magnesium levels were taken into consideration. Patients were excluded if they were aged <12 years or >17 years, if they had any systemic disease, if the hemogram results showed findings of infection, if they had taken any nutritional supplement or medical treatment containing micronutrients in the last 6 months, or if they had admitted to polyclinic due to a sports injury.

The demographic data of the athletes and information related to the sports branch (indoor or outdoor), the training area, the duration of training and smoking status were retrieved from the digital archives. Indoor sports (aikido, artistic gymnastics, badminton, basketball, body-building, handball, indoor football, karate, kick-boxing, swimming, taekwondo, volleyball, weight-lifting, wrestling) are competitive physical activities trained and played indoors. Outdoor sports (amputee football, athletics, football) are competitive physical activities trained and played outdoors. The athletes were separated into 2 groups according to the time of presentation as, Group 1; who admitted to hospital between 1st of April  and 31st of August  and Group 2; who admitted between 1st of September  and 31st of March.

Serum ferritin concentration <12 µg/L was accepted as iron deficiency, a value in the range of 12-30 µg/L was considered as second-degree depletion, and 30-50 µg/L as first-degree depletion (8).

Analyses of the study data were performed using SPSS 22.0 software. Conformity of the data to normal distribution was assessed with the Kolmogorov-Smirnov test or the Shapiro-Wilk test. The Skewness-Kurtosis test was applied. With descriptive statistical analysis, the frequency, mean and standard deviation values were determined. Data were expressed as mean ± standard deviation (SD) values. In different analyses of independent groups, the T-test was applied to parameters with normal distribution and the Mann Whitney U-test to parameters showing abnormal distribution. Correlation analysis was applied using the Pearson Correlation test or the Spearman Correlation test according to the distribution pattern of data. Statistical significance was accepted as p<0.05. 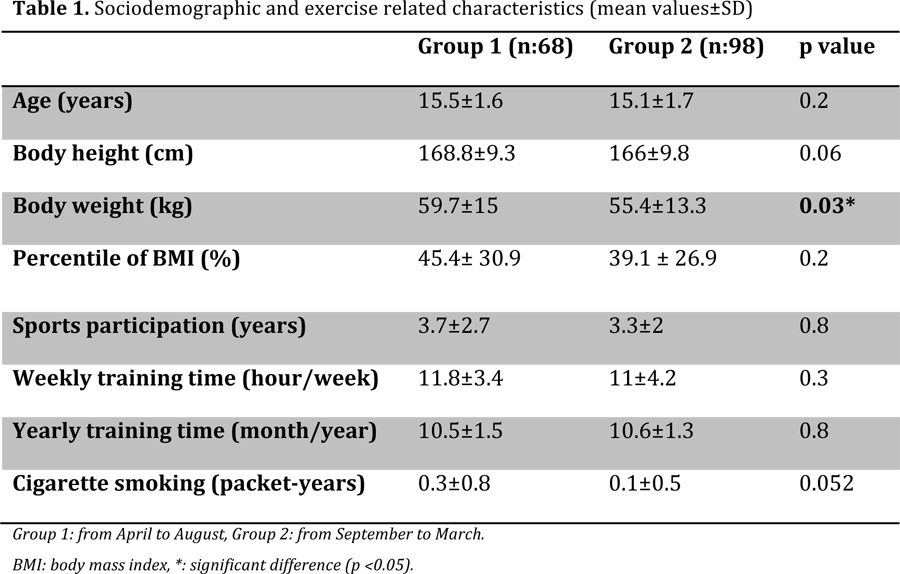 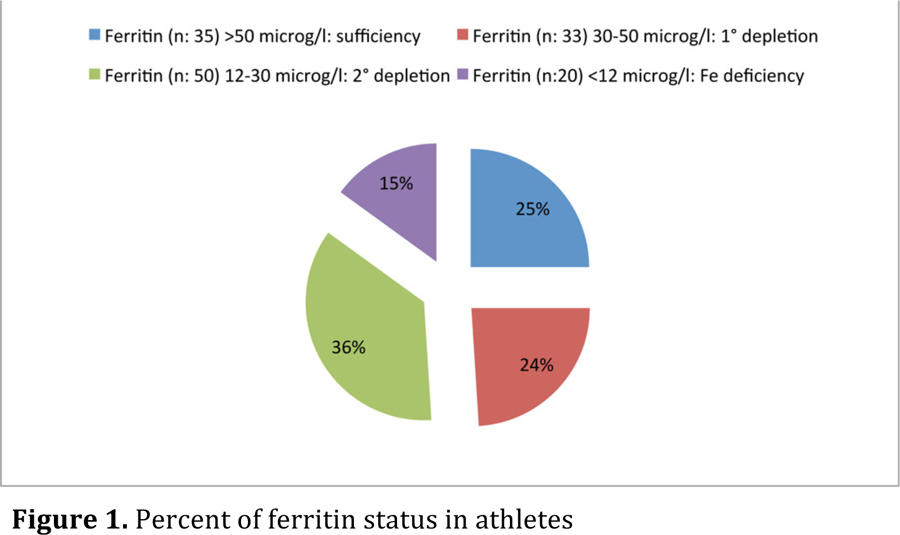 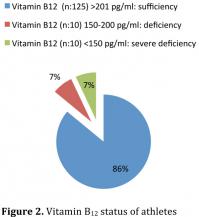 Figure 2. Vitamin B12 status of athletes
×

Figure 2: Vitamin B12 status of athletes 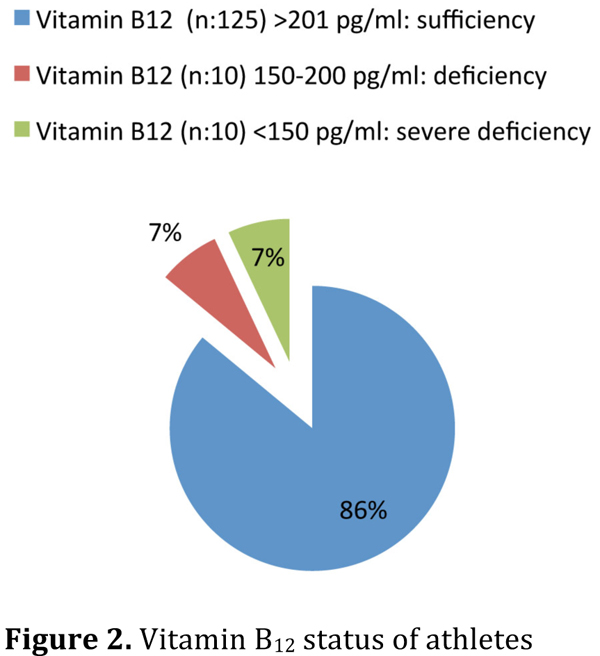 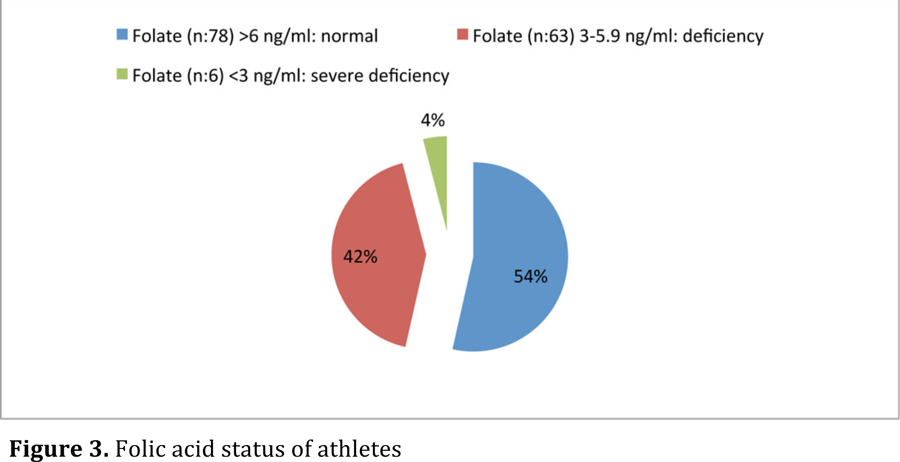 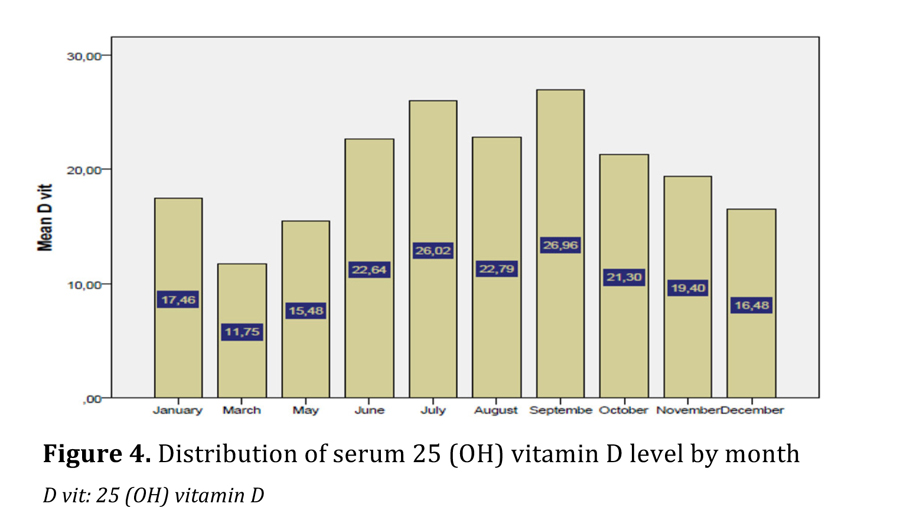 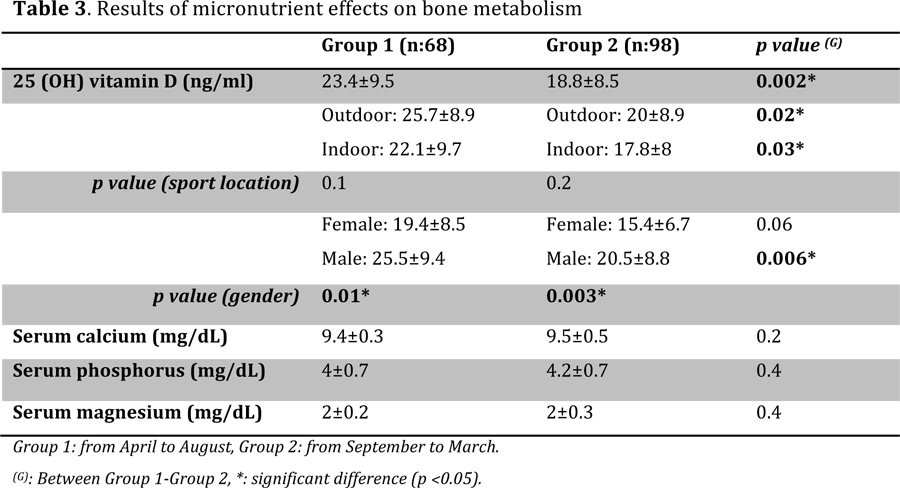 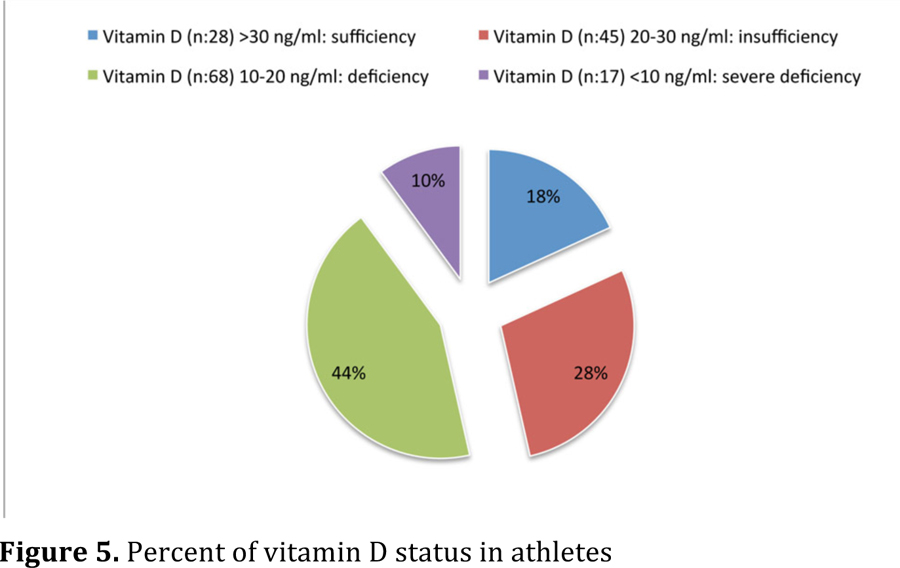 When the micronutrient element status was an-alyzed according to gender, females were de-termined as at risk with lower hemogram pa-rameters and lower serum vitamin D concentra-tions (Table 4).

In the adolescent period, variables such as the training area of athletes, seasonal factors, age and gender can affect the status of micronutrient elements. All athletes should be evaluated according to personal risk factors and there must be close monitoring of adolescent athletes in respect of micronutrient element deficiencies. Extra supplementation of nutrients may help to alleviate deficiciency of micronutrients. Most importantly, maintaining a balanced nutrition and providing regular and appropriate education programs will eliminate the nutritional de-ficiencies.